My journey with blogging has been a complete mess so far. But I keep trying, so I guess that's something. Like so many people, the busier I get, the less I think about doing this. But I want to make this a better habit because it helps me reenforce the types of creativity I espouse.

For a long time, I've used Tumblr, but that just seemed like I was taking it too easy. My alternative has also been to piggy-back on my company's blog - again, also too easy, and just doesn't feel like "me."

So I set out to finally make my own site, which could start to be a little more "me" and start to allow me to combine having my own presence and be built on the things that give me joy.

From the get-go, I new I wanted to do this with the JAMStack. I like the idea of emphasizing simplicity and speed. Additionally, I knew I wanted to try and author via Markdown, as far as posts go. I originally started looking into trying to build this blog in Blazor. I found Blazedown and forked it - so perhaps there will be a day that I roll this site that way. But I didn't want to have reinvent everything. 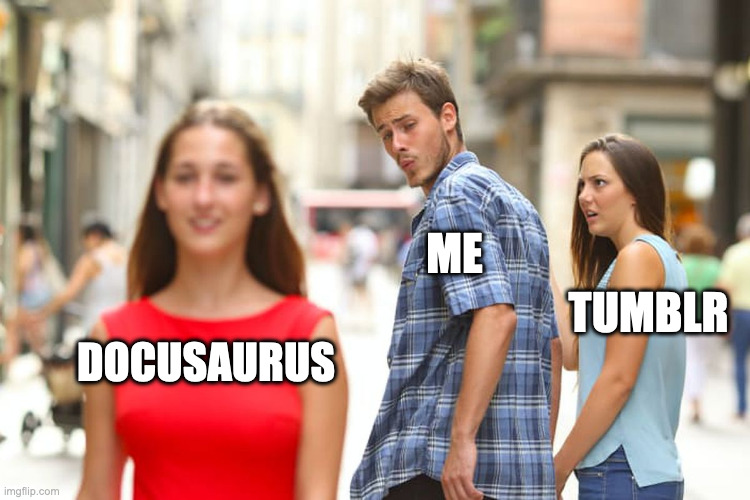 I settled on Docusaurus 2, which has taken it's learnings and expanded beyond documentation. Since I am currently in the throws of Microsoft 365 and Azure Development, it seemed like doing further React development would be a good thing. My hope is to become a contributor for this project as well. I've really enjoyed working with React recently. I also feel that a platform like Docusaurus will actually afford me a number of opportunities to build in automations and integrations (another thing I'm passionate about) using parts of Azure and the 365 platform.

While I may still do more proper blog posts on the ThreeWill site, my hope is to post a little more often here - not necessarily always tutorials or walkthroughs, but sometimes thoughts and updates on what I'm working through, even if it's not groundbreaking or cutting edge.

I'm going to re-post a few of my previous Tumblr posts as I make the move to the new.

One last thing: I previously have tried doing 2 separate Tumblrs (https://homolworks.tumblr.com/) and (https://www.tumblr.com/blog/mhomol/blog/mhomol): one to track work posts and one to track my progress trying to train my kids in coding. I've decided to combine the two here and just tag the posts differently. We shall see how that goes. Besides, it's pretty much just me reading these anyway lol.